R sent me a link to dis magazine

first thought was some fashion people are high all the time, no thanks

so I watched it

since i’m “Working from home”

What the hell is Dis?

the video i liked was directed by @leilah_weinraub

who directed a film called Shakedown:

a press release came in for the band Woods:

I just made that up

I got a job as a magazine editor again. Maybe I should start punctuating my blog posts and thinking about cultivating a learnéd persona, instead of this marijuana casualty vacation tweetsturm

*I never think of “dampened” as meaning “made damp” in this context, but I guess it does. In that form I think I usually imagine something being tamped rather than damped.

my enthusiasm for going Back to School, but it’s OK.
should I take presocratic philosophy or “literary journalism” or history of doc. film or 20th-c. russian lit in translation or spanish conversation or Occupy Wall Street Studies II: Thinking about Capital

leave your comments below, unless you feel hot anger, in which case go for a jog and volunteer somewhere first

you guys ever think about race

started reading pitchfork reviews reviews again, after being reminded of its presence via the NYT (again)

that guy’s voice is addictive, makes sense why he loves Tao Lin. I bought the zine.

I sent a piece of writing that wouldn’t be out of place on this blog to prism index #2, and they printed it next to a sweet chris johanson painting. which looking at it was somehow the first time I ever made the connection between his work (messy/masterful/gorgeous semi-cartoony drawings with ab/ex brush/inkwork, at once punk and mannered, skateboards and sublime landscapes,  with wry/dry inky captions that buttress the work’s philosophical ambition) and Raymond Pettibon’s. 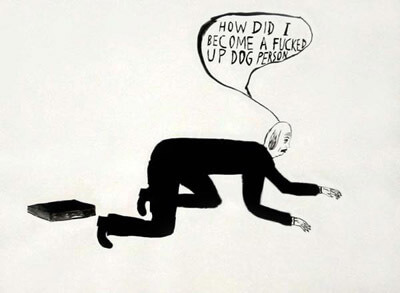